Announcement and thoughts about the future of InstructBot.

The upcoming release of version 3.5 of InstructBot manly focuses on conditional execution of commands and improving the reward system.

An new condition editor has been added to all command types which will delay the execution of a command until the conditions have been fulfilled.

The below shows an example of an improved Mag Dump command, which will run only run when the application is active (e.g. you are tabbed into the game) and the Left Shift key and W key are both not pressed. 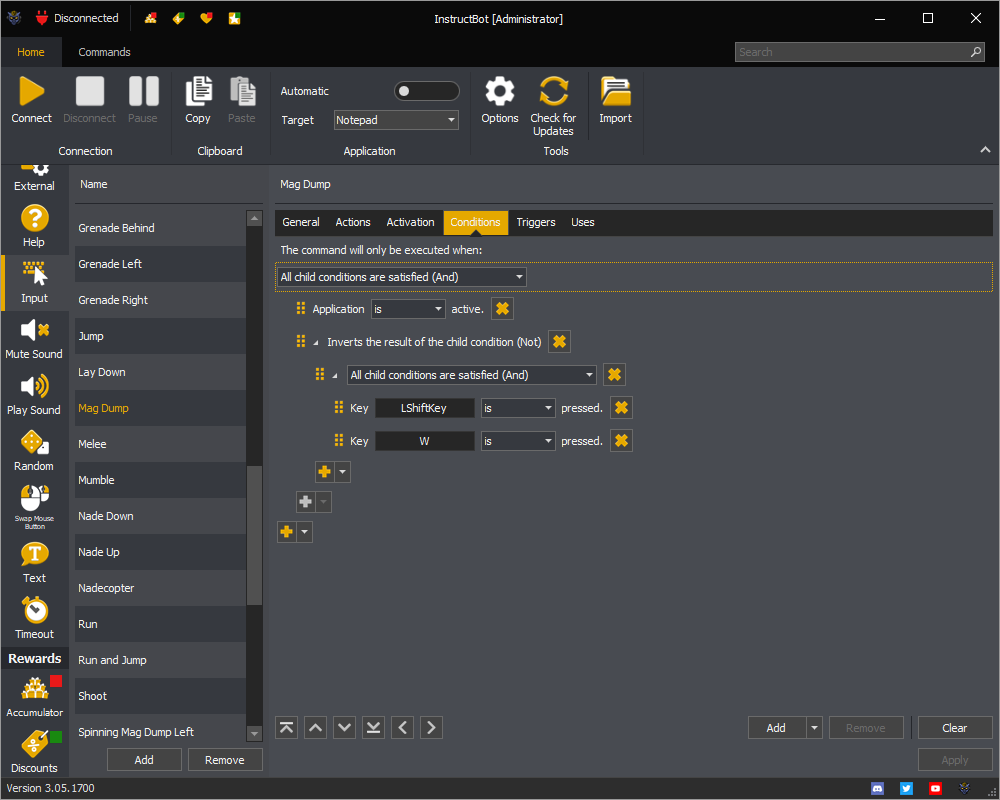 Please note this doesn't stop the command from being queued, so this will still pause the execution of other commands in the same queue until this command has completed (even if those commands could be executed).

The entire rewards screen has been split into a new section, each with it's own button.

The existing accumulator and subscription rewards have been updated so that you can now create sets of rewards which can either give out a specific command or pick a command randomly from a set.

Both reward creators have been normalised into a common format, changing the accumulator so it will now payout the configured rewards at the payout amount rather than picking randomly for the costs of each of those rewards.

Below is an example of the new rewards system for Tier 1 subscriptions. It's been configured so that the subscribing user will always get 1 use of the shoot command and then one other random command. 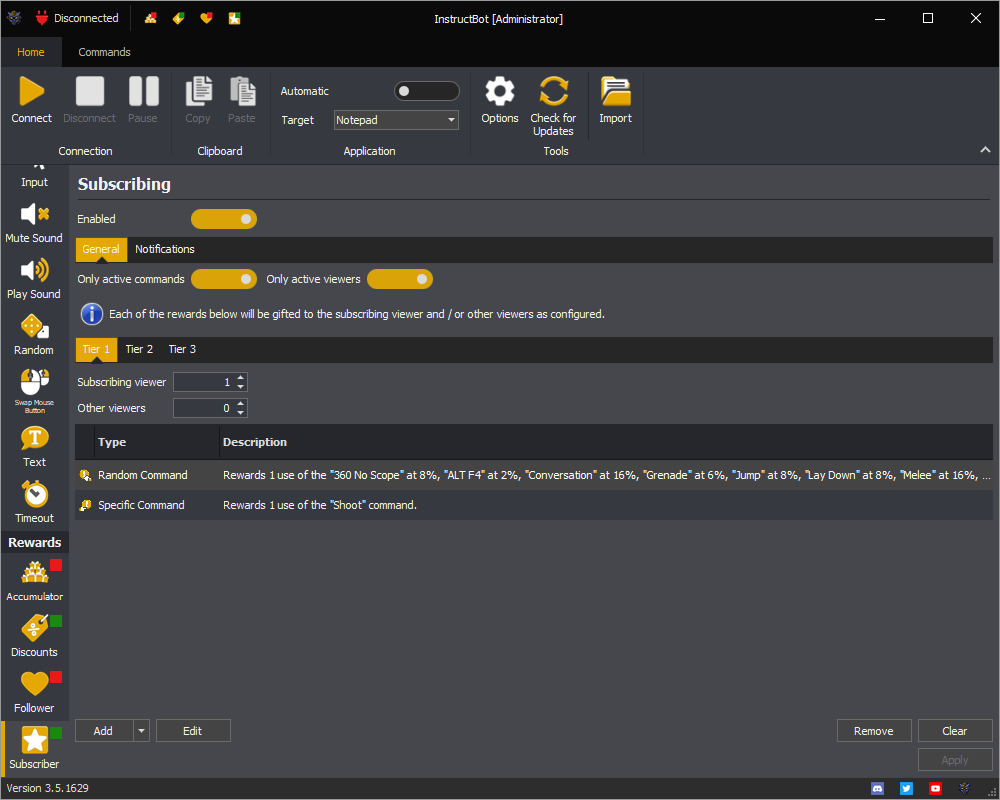 The update allows you to assign different rewards set for tier 2 and 3 subscriptions, as well as reward different numbers of items. The same system has also been used to create a new follower reward.

In the future it's planned to extend the system so that other rewards are possible, for example given points where the point system you use allows it. If you have any suggestions on other types of rewards that could be given please join our discord and let us know.

There have been a couple of other changes to InstructBot.

If you have any feedback on the above or suggestions on what to include in future updates, please join our discord and let us know.

The second batch of tutorial videos on YouTube have been released. These focus on creating commands, you can see an example of the videos below.

If you have suggestions for more videos, please join our discord and make a suggestion. To be notified when more videos are released please subscribe on YouTube .

What is planned for Version 3.6

With the release of version 3.4 and 3.5 ready for testing my thoughts are turning towards what is coming in version 3.6.

My aim is to increase the reliability of the third party integrations, e.g. Twitch, StreamElements and StreamLabs, as well as increase the number of connections available.

Feedback is appreciated so if you have any comments on the below please join the InstructBot discord and let us know.

Investigate and fix why authentication intermittently fails to get the client when connecting. Implement additional logic for Extra Life and Tiltify charity events.

Integrate new emote endpoint so that emotes can be loaded when starting rather than as they are used.

Add support for connections to Tipeeestream.

The first batch of tutorial videos on YouTube have been released. I hope to have the next set ready within a couple of weeks. You can see an example of the videos below.

If you have suggestions for more videos, please join our discord and make a suggestion. To be notified when more videos are released please subscribe on YouTube .

The upcoming release of version 3.4 is has three main areas of focus.

As well a enabling you to specify the reason for the timeout, requested improvements to enable the command to timeout only the triggering user and reducing any timeout which is currently applied are planned and underway.

Simplifying and Improving the UI

There are a number of changes planned which include:

The third set of changes are around bug fixing and improving performance both in the client and backend services.

After having a few entries for people interested in editing videos I've chosen to go with Hue or Campiest Camper on Twitch.

Over the next few months his going to be create a bunch of tutorial videos, starting with video about setting up Twitch, StreamElements and StreamLabs, then moving on to creating applications and profiles before finally creating a video per command type.

I hope to have a set of videos ready to release at the same time version 3.4 or 3.5 is ready to be go.

Looking for a video editor.

I'm look for a video editor to create tutorial videos for InstructBot. At the moment this is exploratory to figure out what they would require from me. So if you are a video editor or know of one please, join the InstructBot discord and message Omsad or e-mail me at omsad@instructbot.co.uk.

What is planned for Version 3.5

The aim for version 3.5 is to tackle a number of questions I frequently get asked how to "fix", which at the moment either have no answer or have an answer which is unsatisfactory.

Feedback is appreciated so if you have any comments on the below please join the InstructBot discord and let us know.

Currently InstructBot's backup is configured to run every time the application is opened. It copies the configuration file to the backup directory, storing ten of these files and deleting the older ones past this limit as required.

This has worked well mostly, as if a user needed to restore to a previous state they can pick one of the files and overwrite the current one. This is however a manual process and it would be better with a user interface to control it.

I would also like to allow configuration of where the backups are stored and the interval at which they're taken as it may not be necessary to create a backup every time the application is opened. E.g. maybe a backup is required once per week and before the bot is updated.

It would also be nice to have a way to manually trigger the backup process, say if you know you're going to need it.

One of the most common questions I get asked is "How do I stop command X from executing when I'm doing Y".

A good example of this is wanting to delay throwing a grenade in Escape From Tarkov because you're sprinting, until after you have stopped sprinting.

To fix this I'm going to be adding the ability to add conditions on when a command can execute. This isn't an entirely new concept as some commands already have a conditions to execute, e.g. they require your game to be active.

The initial set of logic will be pretty minimal, limited to the ability to create simplistic boolean logic and being able to monitor the keyboard state. I hope this will then to allow conditions like Don't execute whilst my Left Shift and W keys are pressed to be defined.

An update to the discounts so that a discount can be applied for Moderators and VIPs. Like the subscriber discounts this will be in addition to any global discount. It's also planned that these will be mutually exclusive to subscriber discounts. E.g if a viewer is both a tier 1 subscriber and a moderator, then only one discount (the largest), will apply.

The existing rewards system for the accumulator and subscribers both do similar things, reward a number of random commands based upon weighting. I plan to update the reward system so that they

The planned overhaul enhances this by making that one options. The initial other planned options to be created is to allow you to define explicitly what a user will receive, e.g. you could reward a specific command (or commands) to be given to a user when they subscribe.

You could also mix and match allowing a user to always receive a specific command and then have a random chance of one or more other commands.

A new follow trigger type, which can queue commands when someone follows your channel.

The upcoming release of version 3.3 of InstructBot has a few improvements.

The console has been updated so that Twitch emotes will be shown as images. If you've subscribed to BTTV and FrankerFaceZ these emotes will also be shown.

You can also turn off user name colouring so the text remain consistent with the reset of the console.

The processing screen has also been updated to include a new emulator menu so that you can create triggers to test your commands.

Clicking on any of the buttons will open a windows allowing you to enter the required settings. For example the below is the settings you can enter to create a new cheer trigger.

After pressing the okay button a new cheer trigger will be queued and processed in a similar fashion to as if it had come from Twitch. So if there was a command with a matching exactly cheer trigger of 100, it would be queued and you could see it within the processing screen.

There have also been a number of other small improvements which include:

The upcoming release of version 3.2 of InstructBot comes with new features allowing you to trigger from more events, and allows finer control over whom can use certain triggers.

There is new permissions on the majority of triggers which allow you to specify if viewers, VIP, moderators or a combination of the above can trigger a given command.

For example below shows an example of a moderator only free command in InstructBot.

As well as being able to assign permissions there are a bunch of new triggers types which can be used to trigger commands.

Ban: Triggers when a viewer is banned.

Host: Triggers when you're hosted.

Raid: Triggers when you're raided.

Timed: Triggers at a set frequency.

Unban: Triggers when a viewer is unbanned.

Word: Triggers when a specified word is used in chat.

The bits and donation triggers types have also been enhanced so you can specify if you want to trigger at an exact amount, up to an amount, an amount and more, or within a specified range.

For example you could create an "Up to" bits trigger which will queue a command when anyone donations up to 100 bits.