Application are used to store setting per application (e.g. a game) you run on your computer. They are also used to control which profiles are used by InstructBot for that game.

For an overview of how to create an application please watch the below.

To create a new application click the Add button. 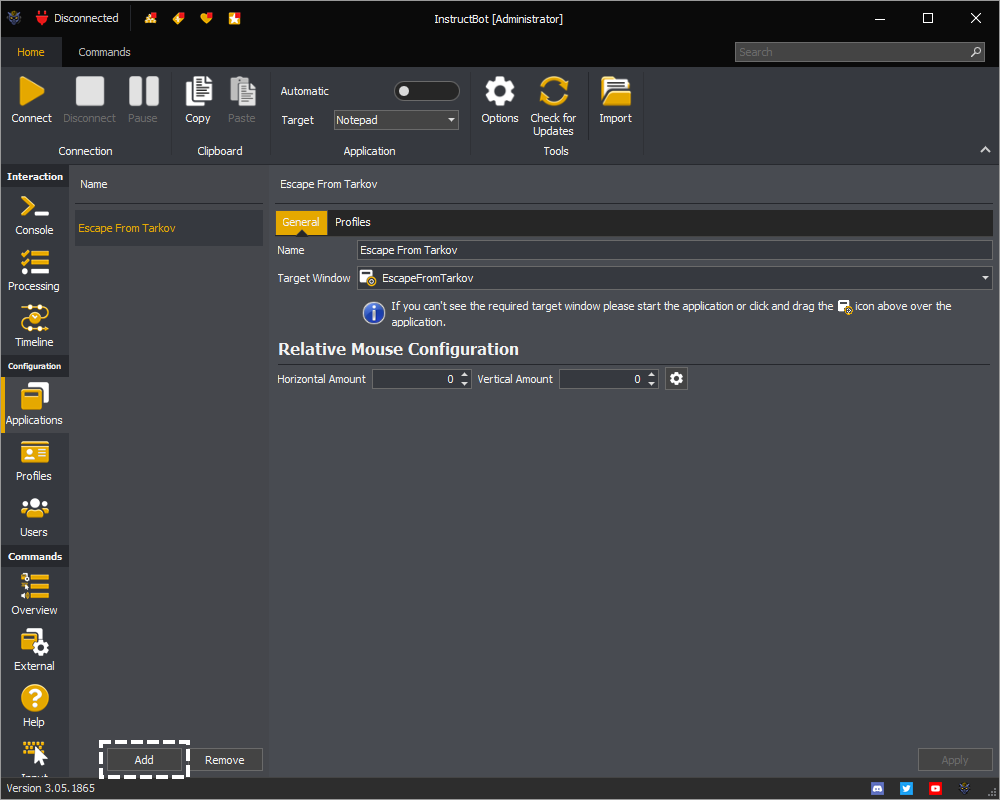 The created application will be selected and shown in the list above. You must give the new application a name and set the target window.

The general settings of an application allow you to update the name, target window and relative mouse configuration. 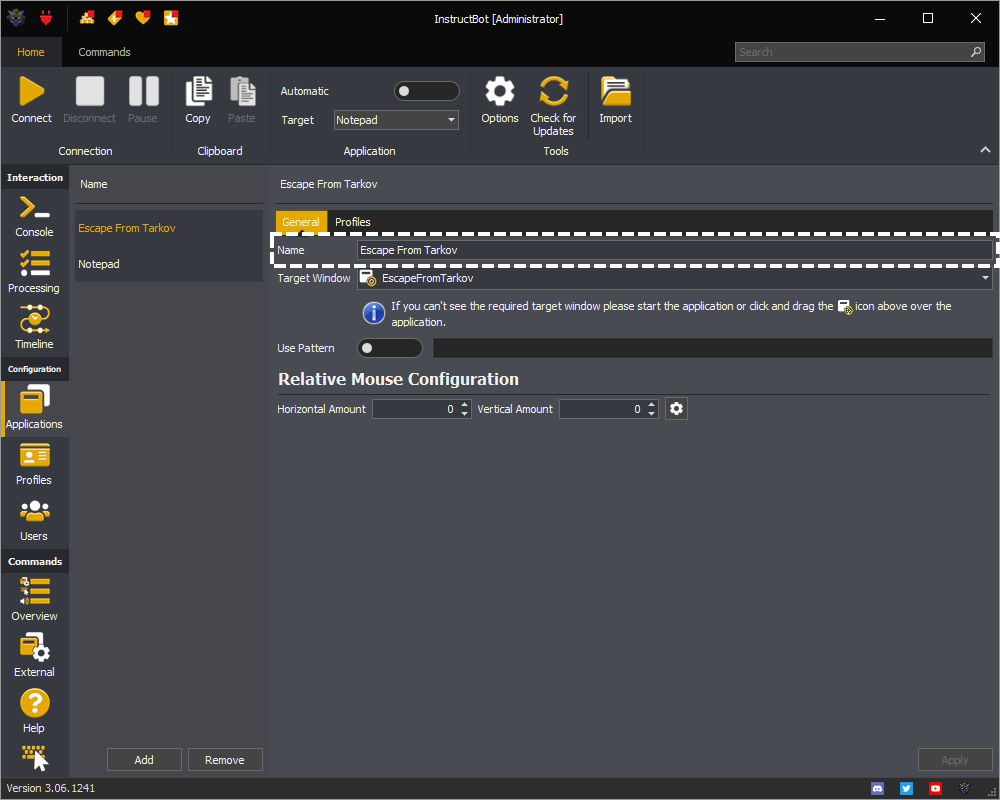 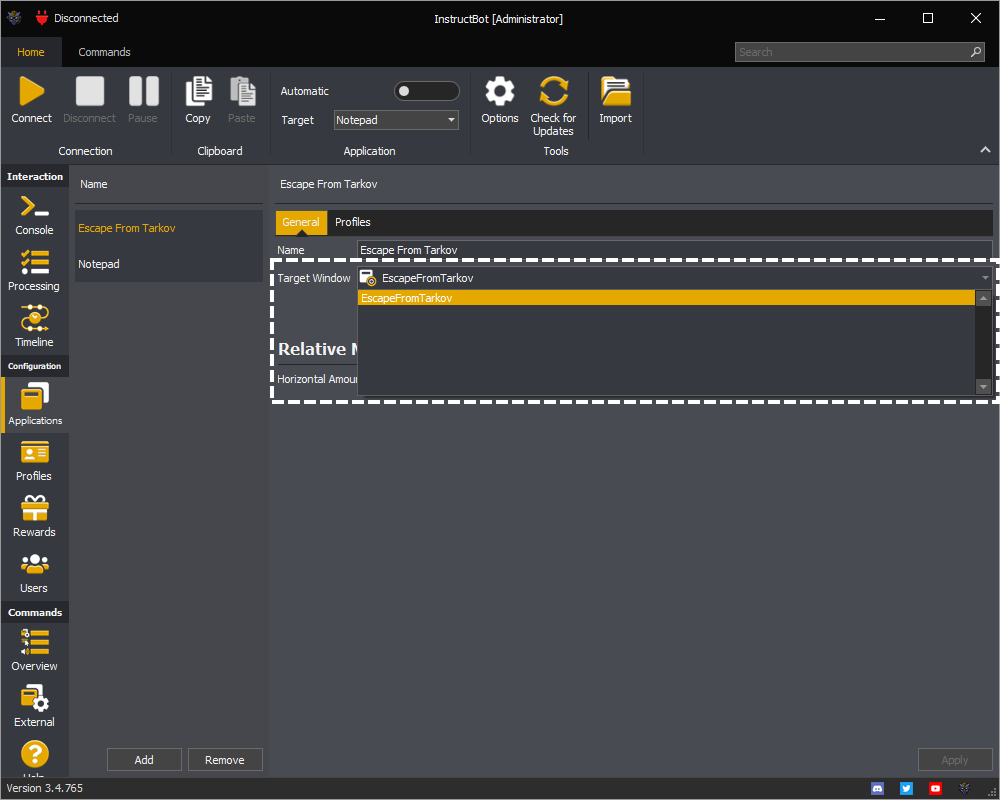 Or by pressing and holding on the select target window icon, and then dragging the icon onto the running application.

Whilst dragging your mouse pointer will change to a

. Moving you cursor over the application window will update the current target window text. 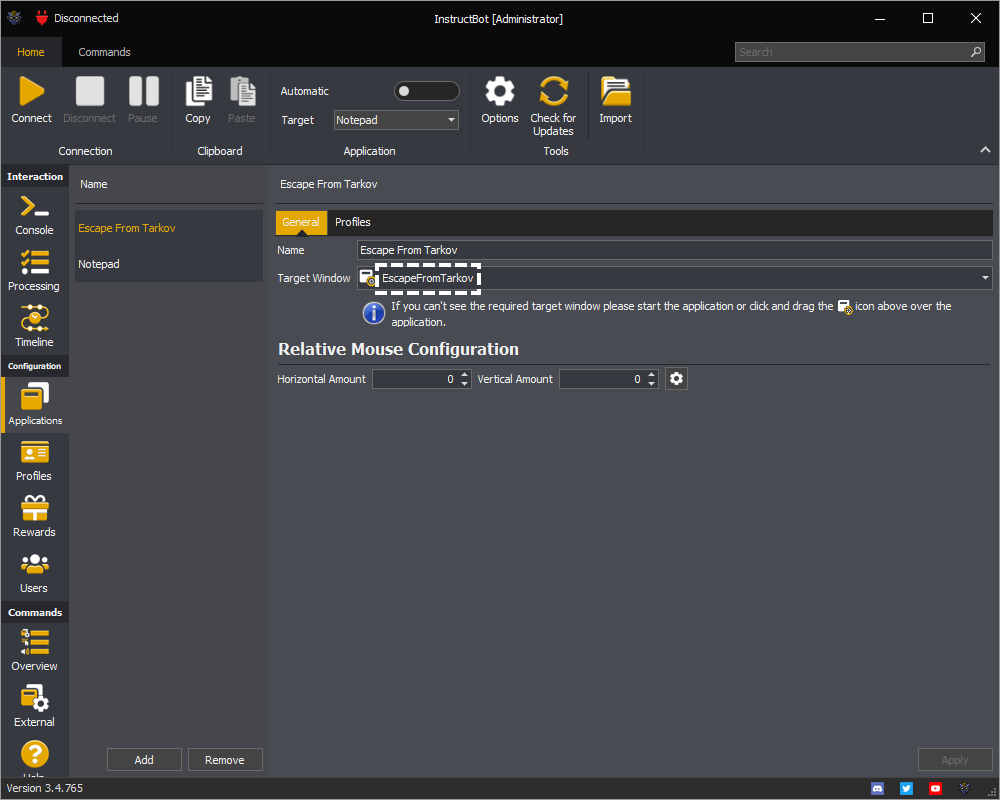 Any command which requires a target, will then be sent to this window when the application is active.

The use pattern toggle button is used to match a target window where the text changes in a predictable manual. 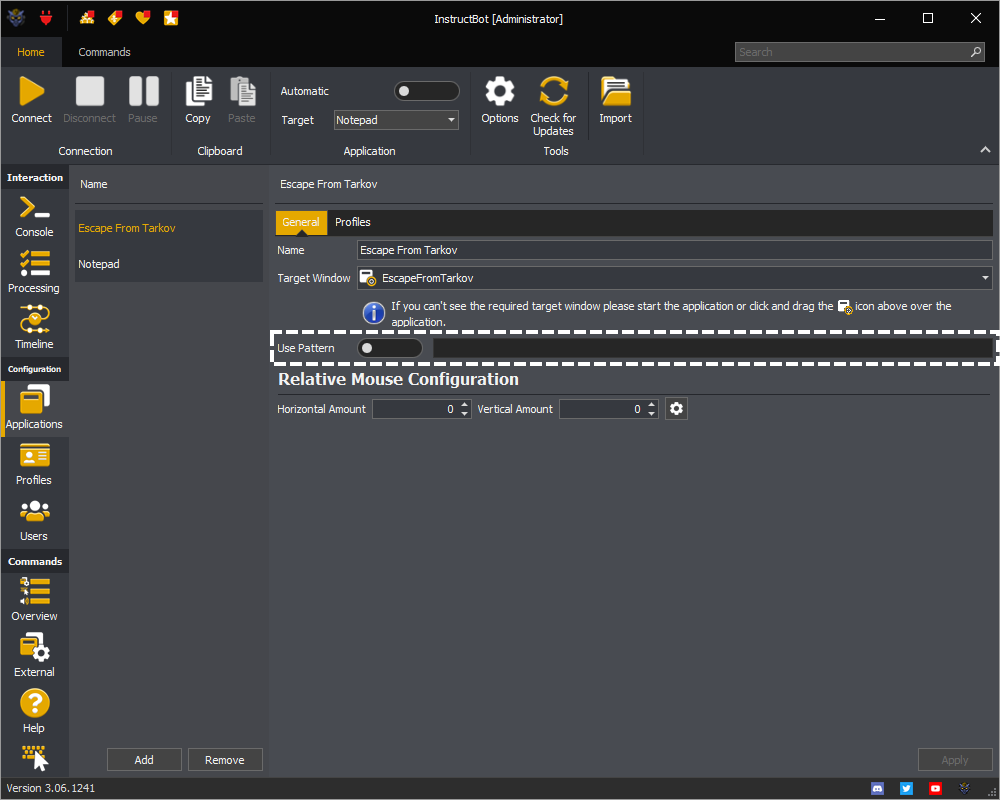 For example if the window text contains a percentage completed, you would need to use a pattern to match from 0% to 100% as it increments.

Each application has it's own mouse configuration. This is used by InstructBot when sending input command relative mouse actions to the application. The numbers configured are used to translate between the required degrees and the amount the mouse has to be moved.

To start the mouse configuration press the cog button:

To configure the mouse for a game.

If you're in a game which allows you to spin in a vertical direction, repeat the above but moving up to down. If your not, you can use the ratio of your resolution to calculate the vertical amount. E.g. if you have a resolution of 1920 by 1080: Vertical amount = Horizontal amount / 1920 * 1080. 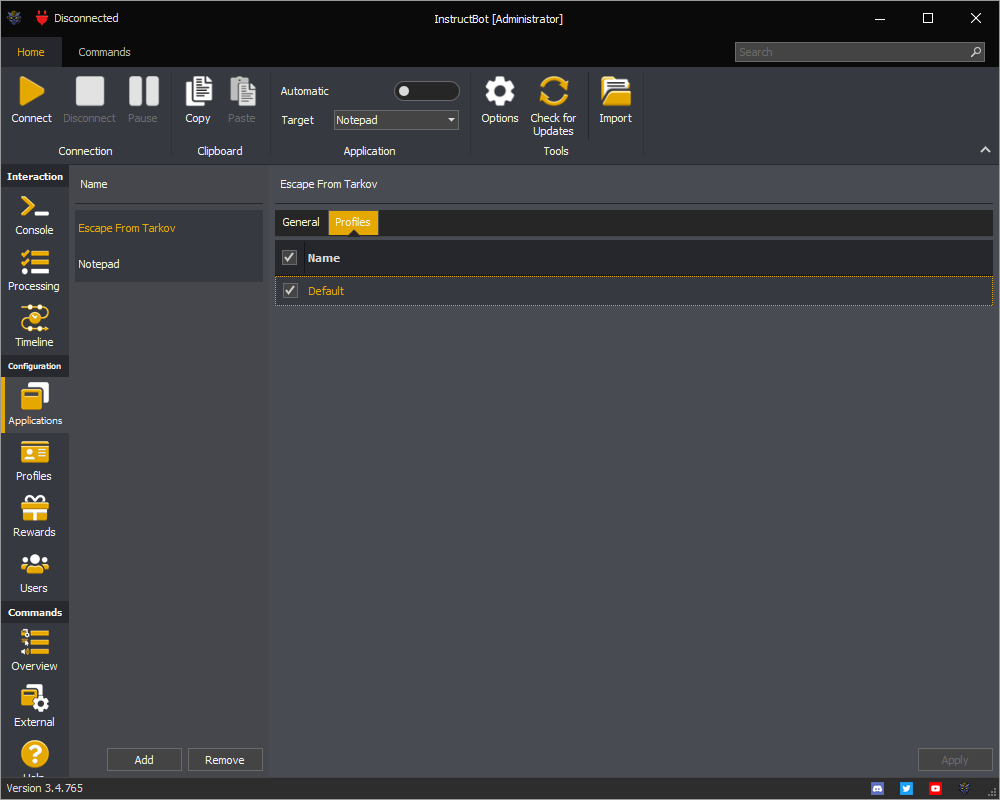 You can have multiple profiles attached to the same application, e.g. so common commands can be shared. To see how to create a profile click here.

To delete an existing application ensure it's selected in the list and then press the remove button. 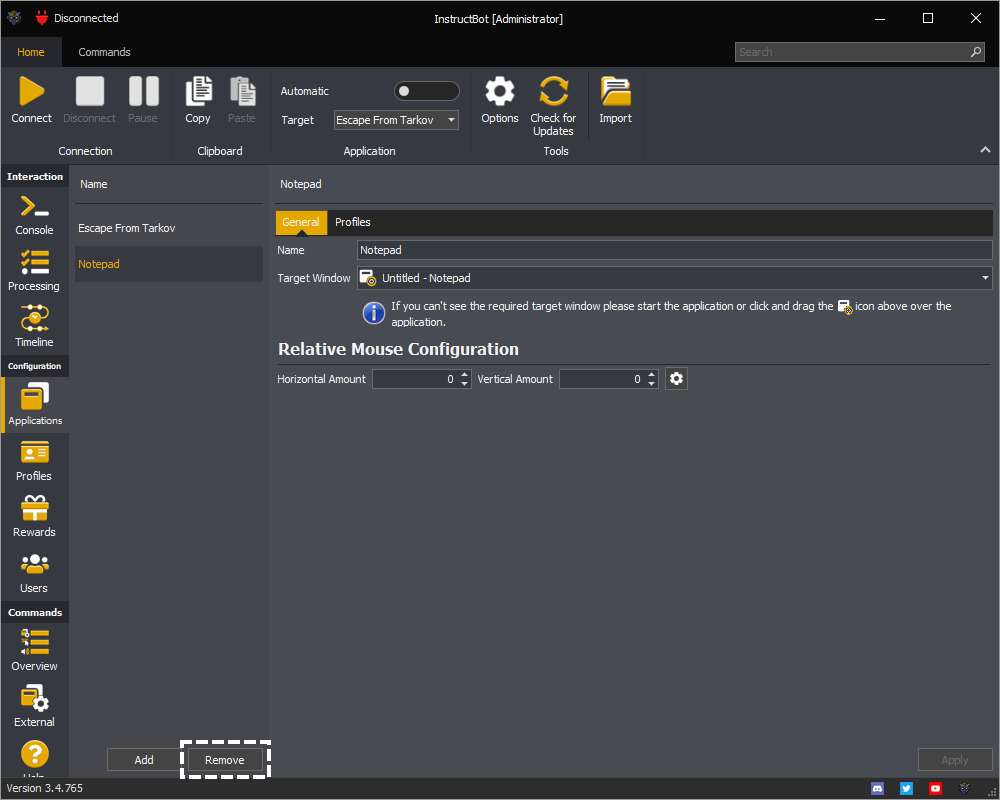 Once removed the application can't be restored.

Some command types require that there is an active application targeted. For example the Mute Sound command targets and mutes the sound of a specific application (and only that application) when executing.

By default InstructBot will switch applications automatically as it detects a known target window. You can modify this behaviour in by disabling it in the ribbon: 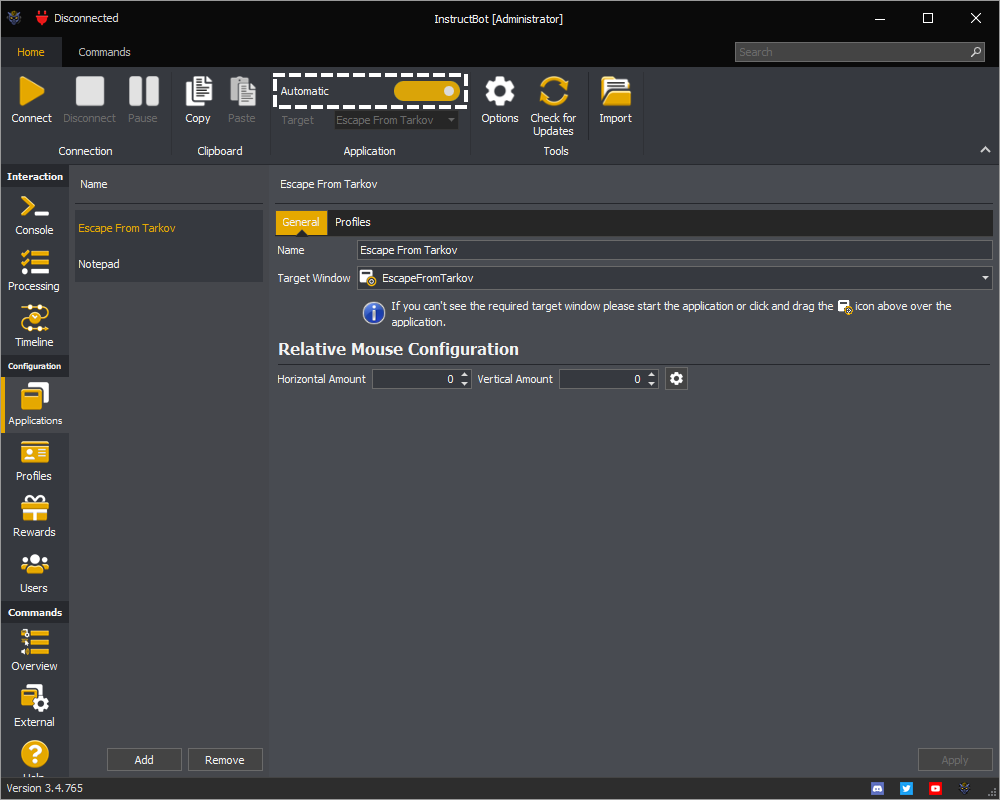 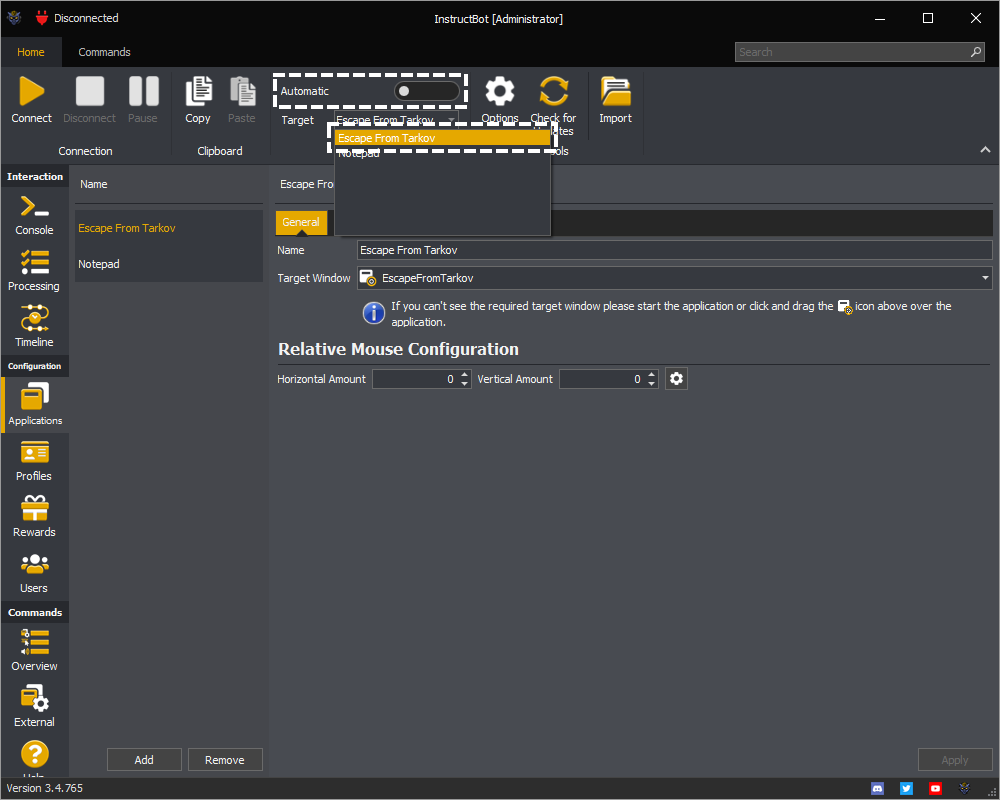